Save a tree, save ten families 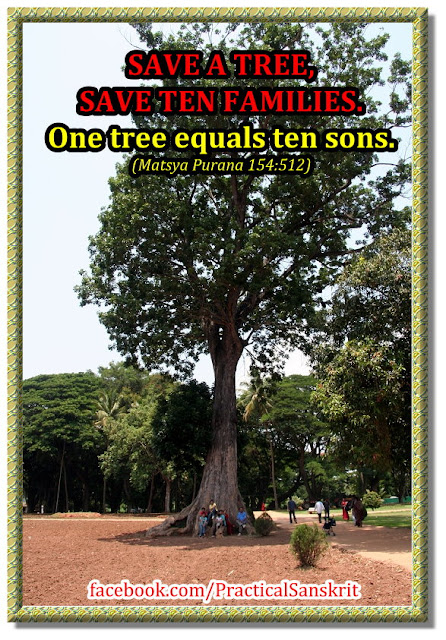 The message here is of immense environmental importance.

Most people want children, even those who can't have their own, want to adopt. It is a basic instinct of Life, to continue itself. Humans want to procreate for continuing their lineage, passing on their knowledge, possessions, empires, businesses etc as well.

Since daughters mostly go away to build a new home after marriage, it has become customary in societies worldwide to also desire at least one son. Kingdoms were maintained based mainly on lineage of sons, with some exceptions of queens.

Water is an important natural resource. Earlier water scarcity was in terms of distance, today due to excessive pollution it is the scarcity of drinking or usable water that itself is a problem. In olden times it was crucial to keep water bodies clean, do some rain harvesting in dry regions. In Indian tradition, great stress has been put on water bodies and their maintenance and on water purification techniques (jala-kataka-renu). Even as far back as Veda-s, one does two kinds of deeds - one for self, another for society. Among the recommended deeds for society are building a well or vāpī (artificial pond for rain water harvesting), opening a school, hospital, inn etc.

A well was one of the closest water source, mostly man-made, well maintained with raised walls, and steps to climb up close to it and pulleys to help draw water with buckets. People would bring water from it and use it carefully, for it involved the hard work of getting it daily.

Much bigger than a well, was a vāpī, that was man-made as well. A huge open catchment area, well-marked with walls, steps to climb down as water level dropped after usage. A vāpī could store water for a whole village for all the dry months. It had water outlets outside for animals to drink as well. The modern Hindi word bāvaḍī comes from vāpī.

Seen in the image is a vāpī in Rajasthan. You can see the size of it by comparing with the humans. It had steps leading down as water level went down during non-rain months.


A hrada is a natural reservoir formed in a river bend, and is usually very calm. The modern Hindi word 'haud' comes from hrada as well.

So, by size, a well, vāpī and then a hrada.
The importance of son (to continue the family efforts of business or knowledge) was so much that a son is compared to ten such huge reservoirs. Of course it is a metaphor used to stress/acknowledge the importance of a son.

But even more important than a son is a tree. A tree, like the one shown in the photo above, is huge. A whole family could stand side by side and still not be more than its trunk! Such a tree does not grow in a few years. It develops an eco-system of its own around it, supporting insects, animals, birds, and humans. It enriches the environment with oxygen, dead leaves as nutrients to the soil.

But here is the kicker! A son would take care of one family, one's own. But a giant tree like this will take care of ten families! With its role in the circle of life, and eco-system cycle. Such is the importance of trees that it is ten times more important than an already important son (child).


Some readers may feel it lays undue importance on son at the cost of daughter, but they must see the main point, that of importance of trees for the environment. It is not to emphasize the importance of son over daughter (though it may be reflecting the cultural desire to have at least one son). It in no way says anything about comparing daughter and son, but simply emphasizes the importance of trees. A son would pass on one lineage, a tree will help so many life forms and so many generations, selflessly!

Also, for group nouns, the masculine form is used in most languages. For example, a group of lions, lionesses, cubs is called 'a pride of lions', but that does not mean it is masculine only. Similarly, the word putra covers both son and daughter, and specifically son. Also, the word may also have be chosen to fit the mete, compared to a longer word for children.


You may also want to visit us on Facebook.