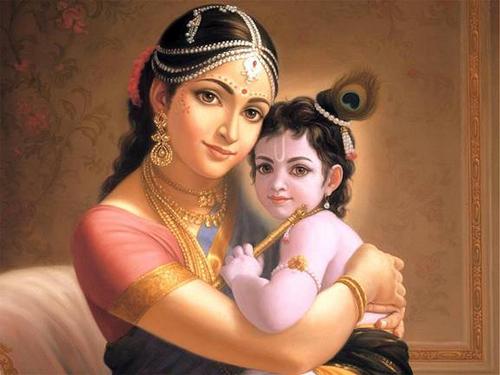 to the son-of-vasudeva, to the god, to the killer-of-kaMsa and chANUra |
to the utter-bliss-of-devakI, to kRiShNa, praise, to the universal-guru ||


वसुदेव-सुतं = vasudeva-sutam = to the son of vasudeva
vasudeva वसुदेव was kRiShNa's father, and hence kRiShNa is also called vAsudeva वासुदेव . Note the first 'a' becoming 'aa' or 'A' a long vowel. See the earlier post (Salutations to Krishna - गोविन्दाय नमो नमः) for details on this.

देवं = devam = to the god, divine
this words comes from divya, which means brilliant, splendid, luminous.

कंस-चाणूर-मर्दनम् = kaMsa-chANUra-mardanam = to the killer of kaMsa and chANUra
kaMsa कंस was kRiShNa's mother's brother and for his fate, he believed a prophecy that his sister's eigthth son will be his death. purANa पुराण also tells us that kaMsa कंस and shishupAla शिशुपाल were the third and last incarnation of viShNu's gatekeepers, jaya जय and vijaya विजय . And they were cursed by RiShi-s ऋषि to go down to the mortal world, due to their rudeness to the RiShi-s. The only way for them to come quickly back was for them to be the greatest evil-doers so that viShNu himself will have to come down and kill them to liberate the earth of atrocities. 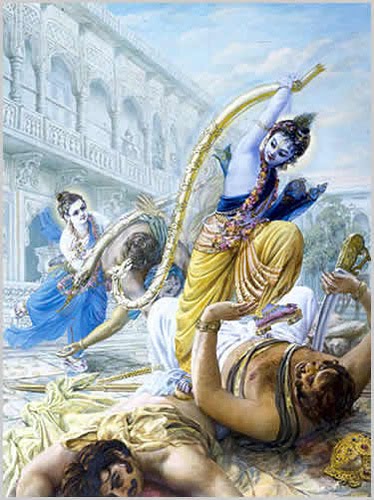 The other incarnations were the brothers hiraNyAkSha हिरण्याक्ष  and hiraNyakashipu हिरण्यकशिपु (causing the varAha वराह (wild boar) and nRisiMha नृसिंह (man-lion) incarnations of viShNu) and of rAvaNa रावण and kumbhakaraNa कुम्भकरण (causing viShnu to come as rAma राम ).

कृष्णं = kRiShNam = to kRiShNa
kRiShNa means dark as well as attractor (from kRiSh to attract, to pull, as a plough pulls theough the earth, tearing it, so does kRiShNa pulls you towards him, tearing all bondages.)