You are the last resort, O Devi! 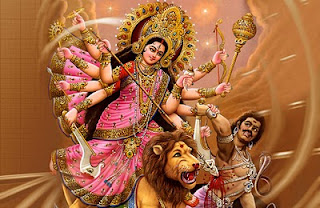 parāyaṇé = o one who is the last resort of refuge (parāyaṇā, fem.)

You are the last resort of refuge for the pitiable and paining people who come to take refuge. You remove everyone's troubles, O Devī,O Nārāyaṇī, salutations be for you. 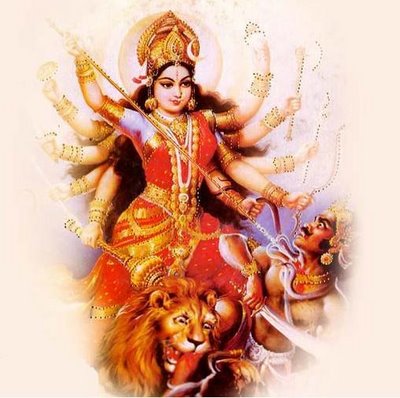 tvaṃ = you [are]
stutā = [THE] praised one
stutaye = for praising [you]
kā = what
vā = or, ever, (to indicate what ever could be ..)
bhavantu = can be
paramoktayaḥ = greatest (parama) utterances (uktayaḥ)

When you [who are] devi, are all of manifestation, are giver of nourishment [in this world and] liberation [from this world], are the praised one, [then] for [your] praising, what ever can be great utterances.

That is, devi, you are beyond my ability to find words to praise you. greatest of the great words fall short of praising you. [but even then let me try].

What do you prefer - money or honor?

In the opening mantra of īshāvāsya upaniṣhad (IshAvAsya upaniShad / ईशावास्य उपनिषद् ) it says, ‘Don’t greed, for whose is wealth?’ meaning we came without anything and we will leave without anything. Whatever is here, whatever you got, whatever you claim to be yours is of this world – found here and lost here.

What we see in the world economy today, is not because some alien civilization has suddenly stolen our food supply, our workers, factories or fields. It is because of two reasons – lightning fast transactions and greed bigger than the sky of some selfish, soulless bodies! Humans make all laws, and hiding behind laws to allow unfair things to happen is hypocrisy. The wealth misdistribution in the name of free market and ‘you are free to do what you want’ is not good for society as a whole.

How much can one billionaire eat, when thousands go hungry? Everyone has the same small stomach. Will history repeat itself when people will be asked to “eat the cake if bread is not available?”

UBS bank losing US$ 2.3 billion in rogue trading must be the biggest and cruelest joke of capitalism! The US economy meltdown was not because of plague, or riots, or war, but purely by the greedy wealthy playing irresponsibly. Nor is the Greek or upcoming Italian bankruptcy. How can the imperial powers who amassed wealth from all over the globe, now have emptied it all? Whom did they feed? Where did the actual resource go? Money is paper without the resource. You cannot eat dollars, gold or diamonds.

How much money does a billionaire need?

Some people only want money, no matter how.
Some others want money but honorably, they care for what they do.
Yet others only care about doing the right and honorable thing, whether or not money comes as a by-product.

This is a wonderful shloka about human psychology as well.

One is reminded of ‘one should not desire respect but deserve it.’ Here, the comparison is not between desire and deserve. Everyone has desires, 'this human is made of desires' - proclaim the Veda-s, and we all know it very well. The question is now, what do we desire?

A lowly person, an adhamaḥ (adhamaH, अधमः) would rather have money than respect, or will even bear some disrespect if it gives money. People do bad things, illegal, sinful, criminal deeds to make money. They are despised by the society, but for them money is more important than respectable life. Some do it so cleanly and with the aid of human made laws that society does not realize or cannot do – bound by laws. Not dharma. Even though one of the meanings of dharma is law, it is law that keep the whole society functioning, not just a fraction of able and powerful but greedy people.

Then there are people who do desire and pursue money, but only if it is in a respectable way, legal, just way. They do pursue money. But they also care about others - are they hurting others, doing something sinful or criminal? Most of us fall in this category.

Then there are those rare souls, who do not desire money. They desire only to do the right thing, good thing, that which is respected by the wise. They care what others think of their deeds, are they doing anything wrong? The money part is only at the need level, surviving level, not at a wanting level. They work just and fair, for the good of all, and the money part is only a by-product. They do not desire money to begin with; it comes to them because of their good deeds.

Given a choice, the lowly person would rather take money than respect, the average person would balance out both (no money, only respect, or vice versa, then not interested), and the great ones, would only see if the deed is respectable, good, just, required and do it even if there is no money!

ichchhanti = desire (plural) ch as in chime. IAST would write it as icchanti 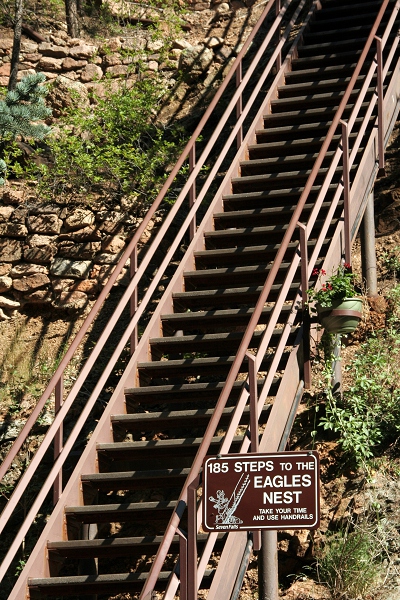 185 steps going up - very soon you realize that goals are easier to achieve if you are consistent and realistic. Coming down was even more dangerous, with jelly knees :) any mistake and you could wobble down the rest of the stairs in no time.

Went up the 224 steps stairs as well, but totally forgot to take picture of that sign.