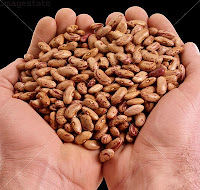 As was the tradition, a man used to give alms to any one who came to his door, a beggar or two or an occasional monk. Usually his wife was the one who would give a handful of mASha (माष) beans. This was a daily morning routine.

The man also had a son, who one day grew old enough to get married. As was the custom in earlier days, the bride was comparatively younger. One day while the daughter-in-law came to serve him food, the man saw that she had much smaller hands compared to his wife's. So he thought of a novel idea to save some money and yet not be seen as a miser.

Next day, he told his wife to let the daughter-in-law give the alms. The young lady gave out alms of one fistful of beans, and indeed it was a much smaller fist. The man was really happy, that even though he is technically giving out a fistful of grain in charity, the fist is smaller and he is saving while building credit of good deeds! What a jackpot.

But, soon, he found that the number of beggars and monks coming to his house increased substantially. News of the new bride, a beautiful young damsel had spread, and now the young villagers were disguising themselves as beggars and monks just to get a chance to see the daughter-in-law.

So the man, even though giving smaller portion of grain, ended up giving more, since there were more people at his door.

It is used when one tries to reduce the loss by being smart, but actually ends up spending more. That is due to the fact that many smalls can add up to be more than a few bigs.

In modern times, the 'Profit at the bottom of the pyramid' theory, works on similar principle that less margin but high volume can also give you high profits. So serving the lower economic classes can also make huge profits, if you reach to a larger mass. Prahlad? CK?

vadhU = bride. daughter-in-law
(groom = vara , that who is worthy of accepting, taking)
mASha = a kind of beans
mApana = act of measuring
nyAyaH = maxim