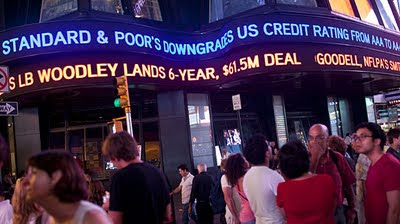 On August 5th 2011 we saw that S&P downgraded the US economy's rating from AAA to AA+
Many jokes were created to make the mood light to match the lightness of many pockets and bank balances. Like, "I didn't know America ran on batteries."

It was a surprise to know that S&P, a McGrawHill division, is headed by a product of a "third-world" economy! Indian born Deven Sharma heads the prestigious S&P. Is it for this day, that he was given the permanent residency and subsequent citizenship by the INS, one may wonder!

Two days back, on August 23rd, 2011, only 18 days after the downgrade, S&P's CEO Deven Sharma is forced to resign. Sure they will say he has some personal reasons or some other politically correct statement.

But what we just saw is a classic example of a Sanskrit maxim - "Don't antagonize the host." We saw similar situation when UN was not giving permissions for an Iraq invasion on pretext of Weapons of Mass Destruction. The former president George Bush threatened to dismantle UN if it was of no use to US! How convenient.

But what to do, after all UN offices are on US soil! Got to listen to the landlord!

Here is the Sanskrit maxim, or nyAyaH.

Do not antagonize the host.
upajīvya-virodha
उपजीव्यविरोध
"The unworthiness of opposing the 'host' (support system)."

There is a popular Hindi saying, "Do not be enemy with the crocodile while you are in the water." [ जल में रह कर मगर से बैर jal mé.n rah kar magar sé bair ] This is at a survival level. People with communist leanings were targeted in the USA, and those with capitalist leanings were unsafe in the former USSR. It is foolish to assume that while you cry foul against the king, you should be allowed to live happily by the same king (or the system). We may think that we have freedom of speech, but it is usually only till the system is not threatened.

The great statesman चाणक्य Chāṇakya’s father चणक Chaṇaka spoke against the corruption in royal treasury and was duly persecuted by the royalty! Wikileaks' founder Julian Assange went against the 'system' and finally had some charges against him and was caught by police. A Canadian professor even suggested that he be eliminated! Imagine, a professor saying that! So, do not make the system your enemy and still expect it to support you.

Metaphorically, it is not good to go against that upon which you depend, for safety, livelihood or any other help. Do not ruin your own support base. If for some real reason you do have to, then consider that source of support no more. Or as Alex the lion warns Marty the zebra in Madagascar, "Do not bite the hand that feeds."

Do not ruin your own support system.


Read more maxims in the book "Attitude Shift - Sanskrit maxims for life and leadership" in print or Kindle e-book.