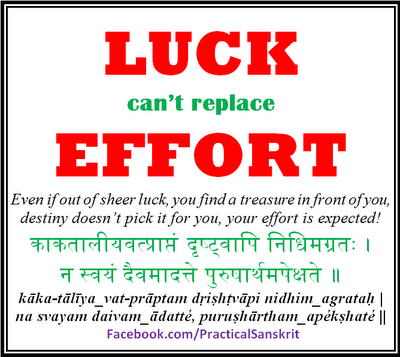 Some people believe that luck is the most important factor in success. While some are genuine humble, others may be implying that they are somehow special to have such good luck. Luck is something you can just buy, borrow or work at. But, luck is not the key to success, it is hard work, effort, industry.

Luck would be defined as something we had no control over, else if we had control over it, then it would not be luck, it would be our karma. It is called daiva, bhāgya (दैव, भाग्य) etc in Sanskrit and the 'destiny' is a good close to it. Destiny doesn't mean there is a secret plan for you and you don't know. It is the X-factor that you have no control over, since you don't even know it.

Sanskrit has a tradition of maxims, called nyāya (nyAya, न्याय) which capture a situation in life, usually with a nugget of wisdom. One of the most famous is kāka-tālīya nyāyaḥ (kAka-tAlIya nyAyaH, काक-तालीय न्यायः) which says that - a crow swoops down and sits on a branch of a Palmyra tree, and the hard fruit falls on its head and it dies. What are the chances of this happening? It is by sheer coincidence that the crow flew and sat on that very branch, and that very second a fruit had to fall on its head.

The shloka here says that even by such sheer luck like kāka-tālīya nyāyaḥ you were to see a treasure in front of you on your path, luck (daiva) would not pick it up for you, you are still expected to make some effort to pick it up.

We might say that some people get all the luck, but maybe we all get the opportunities, but a few actually realize it and put effort to seize it. During Diwali weekend of 2005, Phanindra Sama missed his bus from Bangalore to Hyderabad, and instead of just cribbing about it, he started to find whether the bus ticketing industry really was efficient enough or were there some tickets that actually went unfilled and no one just knew. So he set out to start redBus.in, a bus ticketing company. It has the largest number of bus operators signed up and by 2010, redBus.in made a turnover of 600 million Rupees.

How did that happen? Out of so many people, including IT people, who missed the bus, only Phanindra saw it as a treasure of opportunity lying in front of it. If you were expecting a story of someone finding a real treasures lying on road, I am sorry to have raised your hope, that is only metaphorical.

Never avoid effort, never underestimate it and never think you can circumvent it and still achieve success ethically and legally. Or in other words, luck helps them who help themselves. You still have to put effort to use your good luck!

= kAka-tAlIya_vat-prAptam dRiShTvApi nidhim_agrataH |
na svayam daivam-Adatte, puruShArtham_apekShate || 4 || (ITRANS)
= Even if pure luck (‘Crow on a Palmyra tree’ maxim) one sees treasure lying in front,
destiny will not pick it up for you, effort [to pick it up] is expected.

agrataḥ = in front of
agra = front

svayam = on its own

ādatté = accepts, takes (for you)