how to read and write sanskrit?

there are many ways to write sanskrit when it comes to roman scripts. as they say necessity is the mother of invention. these inventions came for various needs.

first was the desire to write in roman script, by english scholars of gone by centuries, when they started discovering a whole new world. a world, that they quickly found was much more than they had imagined, much richer than the physical opulence of india that had drawn them here in the first place. to use an insufficient script like roman script with only 26 letters is a challenge to say the least. the letters are not enough, and sounds are duplicated. some of the letters duplicate a sound like 'k', 'c' OR 'c' and 's' OR 'v' and 'w' OR 'g' and 'j' etc.

in the pre-computer era, print media was using special characters like ā ī ś ŗ ņ ţ which were printed only in scholarly books. so shiva (third of the trinity, mahAdeva, mahAkAla, with the trident etc.) was written as 'śiva' and durgA (the unified energy of all the divine forms, riding a lion, (called The Mother by all) is written as 'durgā'

this has led to so much confusion in reading sanskrit, along with the other funny things used by scholars, but mis-interpreted by non-scholar. people writing by hand, forgot the special marks on the 's' and 'a' and wrote
shiva -> siva and durgA -> durga


not only is the 's' wrong, so is the 'a', to the point that such mistakes can mean a totally different name, since a trailing long 'aa' is a way to change gender.

so kRShNa (कृष्ण)= son of vasudeva, speaker of bhagawad gItA; but it becomes krisnaa (क्रिस्ना)= with a long 'aa' and mean 'draupadi' the wife of the pAnDavas.

more damage has been done to india(ns) by trying to learn sanskrit through english texts which didn't care for the common person and their biases towards reading english words.


in the computer era, in the beginning, with the plain keyboard, a scheme was developed to correctly communicate the lyrics of popular hindi movie songs (of the golden era, which were great poetry) and for some sanskrit mailing lists (pre-web days). this is called ITRANS and has been influential in any and all further developments in this regard.

now of course we have Unicode which does a great job of making the text searchable and portable, independent of old fonts that differed in their mappings and caused lot of migration issues, or visitors had to download a truck load of fonts, one per site.

over the years, i had developed bhaarat, bhaarat2 fonts for devanAgarI and pranav and pranav2 for transliteration. the pictures below are from one of my books 'Hindu Prayer Book' in 2005 that explains the various finer points while reading/writing sanskrit in roman font.

learning devanAgarI font is a bit tricky, and steep in the beginning, but since the script is perfectly mathematical - one sound, one letter - the learning initially pays off handsomely later. after all, indian kids pick it by early on, my daughter picked up even writing by the age of 4.

more on this after readers get time to digest this :)

[ click on image to view larger, much clearer size ] 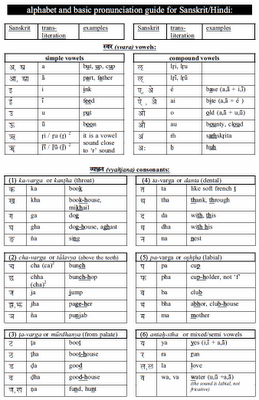 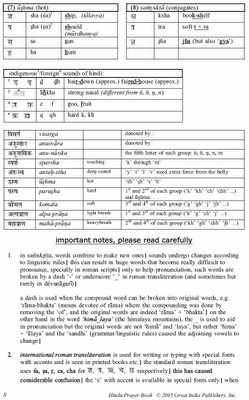 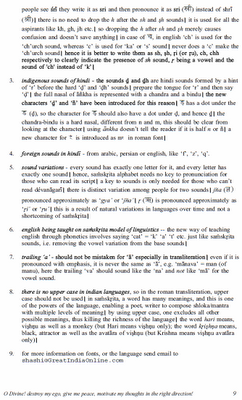 like it? then become a fan of the blog