meet the alphabet - the letter a - अ 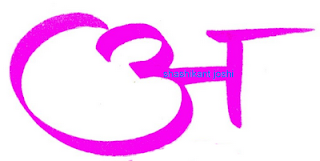 the sanskrit language's alphabet is very scientifically arranged. it shows the deep understanding of linguistics as early as 500BC (pANini's time) but the alphabet might have been in this order even in vedic times, which might push it another 1-2 thousand years back, conservatively. we will see its arrangement in later posts. check this

the letter 'a' is pronounced like 'u' of but, cut, shut etc.
in a word, the trailing sound of 'a' causes a lot of confusion in modern times. if it is not stressed enough, it sounds like a consonant without the vowel, like many english words put, cut, but etc. the lack of stress on trailing 't' is what would be called a 'halant' or vowel-less consonant sound.

when it is stressed, usually it ends up sounding like 'aa'.
e.g. yoga is pronounced erroneously like yogaa, whereas it is somewhat like "yo-g-uh" (NOT yogurt, but yogurt without the 'rt' sound!)

this confusion gives rise to errors of saying shiva as shivaa (pArvatI), brahma (brahman, the supreme unmanifest) as brahmaa (the creator, the manifest), drupada (the king) as drupadaa (his daughter), kRiShNa (the cowherd) as kRiShNaa (draupadI). gaNesha is pronounced as gaNeshaa. the 'sha' and 'ga' have exactly same vowel pronunciation, but mostly in english it is pronounced as 'ga' and 'shaa'. avoid such errors.

the sacred 'om' is made up of a+u+m [a + u = o] and
a stands for viShNu
u stands for maheshwara (shiva)
m stands for brahmaa.
thus praNava (om) is trifold. 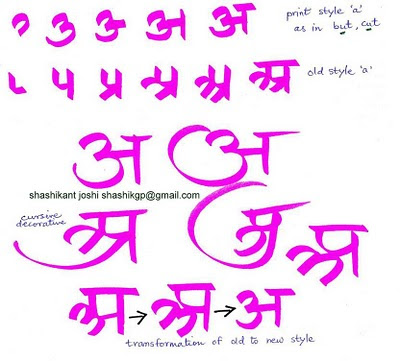 [the comments about the letter style is shown in handwriting]

as a prefix to adjectives, a- has 6 different shades of meaning. it works like the in-, im-, un- prefix of latin. apart from one exception, the an- prefix also forms from 'a' only.

this should NOT be confused with verb prefix a- denoting past tense. e.g. apaThat (read in past), agachchhat (went)

1. similarity! similar but not same. e.g. a-brAhamaNa, like but a brAhamaNa (maybe a kShatriya or vaishya)

4. less, minimal. (this is like 2). e.g. an-udarA (small waist)
careful, it is not anudAra which is an-udAra not lenient)