this is the second letter of the alphabet.
it is a long sound, similar to the 'a' of father, or hard.

a long vowel is called 'diirgha' (meaning long), and is said for two units of sounds. the short vowel being one unit of time. when counting the timing of a verse based on vowels, the short vowel is called 'laghu' (short), and long one is called 'guru' (heavy, more (in duration)). in chanting, or non-conversational speaking, there is a third longer vowel also, but that is not part of normal words used for conversation.

it is written in roman characters in ITRANS format as 'aa' or 'A' (single character to keep word length short and for readability). the use of a single character for a single sound is key to sanskrit alphabet, and gives rise to some seeming complicated 'conjugate' letters, which are combinations of consonants. more on that much later when we talk about consonants.

so, if hard, father, etc were written in ITRANS based on how they were pronounced, it would be 'hArDa' (हार्ड) and 'fAdara' (फादर).

the 'a' (short) and 'aa' (long) sounds have to be clearly understood. as mentioned in previous post on 'a', the confusion between the two can cause meaning difference of earth and sky, black and white. a suffix of -aa is the most common way of making the feminine form of the word.
e.g.
kRiShNa = lord kRiShna; kRiShNaa = draupadii (wife of the pAnDavas, daughter of drupada)
drupada = king of pA~nchAla; drupadaa = (of drupada), his daughter
jalada = jala+da = cloud; jaladaa = jala+daa = river
shiva = lord shiva, mahesha; shivaa = durgA, pArvatI, devI, shaktI

this happens mostly in the trailing sound. 'a' and 'aa' sounds in between a word are usually always pronounced correctly. 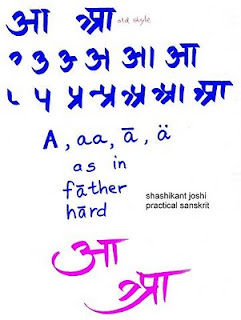 the word 'aa' and its variants have various uses -

2.
as a prefix for verbs and nouns to show -
- proximity, nearness etc.
e.g. karSh = tear, pull etc; A-karSh = pull towards oneself, as in attract. [root word for kRiShNa as well]
kramaH = sequence, step by step; A-kramaH = to come nearer; attack (by getting too close)

- from a starting point, boundary till now
e.g. janma = birth; A-janma = since birth, all one's life
maraNa = death ; A-maraNa = till death (as in fasting till death)

check this for full chart of the alphabet