The joy of Shiva - good wishes of Mahashivaratri महा-शिव-रात्रि !


This classic mantra in praise of the Great Lord, mahAdeva (महादेव), the Great Time (mahA-kAla महा-काल) is a good source for various names of Shiva (शिव) which also define its attributes for the form-meditating devotee.

Let us see them one by one.

shambhu
The root verb 'sham' (शम्) means to pacify, calm down, even be tired, suppressed, to destroy. Shiva in his rudra (रुद्र violent) form destroys the bad and in its benign form brings peace, calmness of a yogI (योगी). The same root is in the name sha~Nkara (शङ्कर) which mean that which does 'calming', that is, brings calm, peace, good. 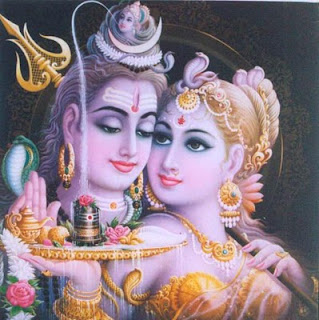 umA-pati
We saw in an earlier post the name umA (उमा), for pArvatI (पार्वती). When the beautiful young princess, daughter of himAlaya (हिमालय) decided to win over shiva by her beauty and service she failed miserably. In the process, even kAma (काम), the god of desire was burnt alive, forever without a body. He was henceforth called ananga (अनङ्ग) - one without a body.

This made pArvatI even more determined and she chose the path of the ascetics. When she made her decision known, her mother menA (मेना) cried out in anguish - 'u mA' उ मा (oh! no.). And hence pArvatI got her name as 'umA'.

Of course, when the divine lady were to penance, as tough as she did that she even stopped eating fallen leaves (for which she was called a-parNA अ-पर्णा, without leaves), the divine god can't resist for too long. Convinced of her devotion, shiva finally weds her. And hence he is called 'umA-pati' = husband of umA (उमा). sura-guru
He is also called the guru of the gods themselves. The divine beings are called devatA (देवता) or deva (देव) and are the multi-faceted manifestation of the same divine principle, somewhat like the Greek gods. There are many occasions when they all go to Shiva for help. The most dreaded times of the churning of the celestial ocean produced, as its first output, the poisonous halAhala (हलाहल), which was like a black dense liquid that suffocated everyone. Whenever I think of this, the image of oil and gas extraction comes to my mind. How poisonous natural oil is as is, it destroys beaches, soil, water everything. The same oil when tamed and purified properly is the greatest boon of modern age!

So, when halAhala was suffocating everyone, it was Shiva who drank it up and stopped it in his throat, and got a new name - nIla-kaNTha (नीलकण्ठ blue throat-ed).

jagat-kAraNa
While devotees of various forms of the same divine principle claim that their favorite (iShTa इष्ट) deity is the one and all, cause of the creation etc., we must understand it properly, without bias.

The 'concept' of Shiva is that of change, the transformer. Change being time, he is called mahA-kAla, the Great Time. And hence, he is the cause of the universe. Nothing is beyond Time. All things happen in its domain.

His association with Time is unambiguous - snake, moon, the Sun and Moon as his two eyes, and his very name mahA-kAla (Great Time) all suggest that shiva is the paramount concept of time and change.

pannaga-bhUShaNa
The snake is another symbol of Time. Even the symbol of snake eating its own tail, that Kekule saw in his dream, helped him think up the molecular structure of Benzene, one of the major breakthrough of organic chemistry. Shiva has wrist bands, necklaces, arms bands of such snakes. While other sophisticated gods have golden jewelry to adorn them, Shiva has the raw nature embodied in him. The river ga~NgA, the snake, the bull, the tiger skin, living on snow mountains, the ashes, the primordial instrument of Damaru (डमरु twin drum) - all are evidence of Shiva manifesting in the creation! The TIME is in everything. Everything is transforming every moment, and this is Shiva!

mRiga-dhara, pashUnAm pati
Shiva represents the force of life, he sustains the living beings. He represents fertility, the regenerative force. This is important to remember, because people mistakenly think he is the destroyer! He is the transformer, old to new, new to old. The support of all life force, animals. His symbol of lingam (लिङ्गं) and his ride the bull, both represent the regenerative force of life, without which there would be no such discussions possible! Growing up with synthetic values make people wonder about the forms of Shiva.

sUrya-shashA~Nka-vahni-nayana
This comes back as him representing Time. He is called tri-netra (त्रि-नेत्र), tryambakam (त्र्यम्बकं) - the three eyed. Sun and Moon are his two normal eyes - marking the movement in the physical world, day and night. The third eye is the eye of knowledge, the fire that burns the dead junk of desires, removes the darkness of ignorance and shines inside out. It is the eye with which he destroyed kAma-deva (or desire).


If you like the posts on the blog, please support by checking out the new book on Sanskrit Maxims. Your support is very much needed and appreciated to keep bringing ancient wisdom in modern context. Please visit Attitude Shift - Sanskrit Maxims for Contemporary Life and Leadership.

सूर्य-शशांक-वह्नि-नयनं = to the one whose eyes (nayana) are the sun (sUrya), moon (shashA~Nka) and fire (vahni)

शिवं = to the auspicious (shiva)