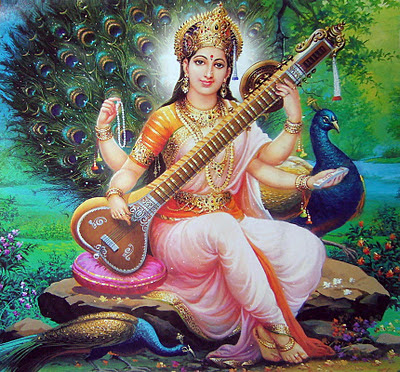 I bow to the one who has ear-rings adorned with the shine of moonlight, to Bhavani, to the one who is like a river of nectar to extinguish the scorching of this mortal world. || 3 ||

Like any epitome of beauty, her jewelry is also impeccable. Her ear rings have a shade of shining moonlight. Imagine it as a name of a fragrance or of a pearl - 'Shine de Luna' or something equally exotic. She has those ear rings.

She is also Bhavani (bhavAnI), which is the name of Parvati. Bhavani literally means bhavasya bhAryA - the wife of the bhava, the Lord God, that which has happened, formed. Remember, the whole world is imbibed with the divine. First there was the unmanifest, then the manifest - the bhava, that which happened. The power that sustains that, is Bhavani, much like a wife sustains the home.

This mortal world has many troubles, pains and sorrows. Well, there is positive also, but we only remember the powers to be during trouble, be it the police, government or the divine. The scorching pains of this mortal world are extinguished, soothed by the nectar like waters of the river, that is literally - the Saraswati river; and figuratively - the knowledge supreme. Ignorance is the main cause of all troubles and Saraswati removes ignorance.

Watch out for more shloka-s from Saraswati Stuti coming up.

namAmi = I bow
yAminInAtha = lord (nAtha) of the night (yAminI), the moon
lekhAla~NkRita = adorned (ala~nkRita) with the streaks/lines (lekha)
kuntalAm = to the one who has [such] ear rings
bhavAnIm = to Bhavani, the mother of the world
bhava = this world, that which has happened
santApa = scorching, pains and sorrow
nirvApaNa = for extinguishing, calming, soothing
sudhA = nectar
nadIm = to [such] river