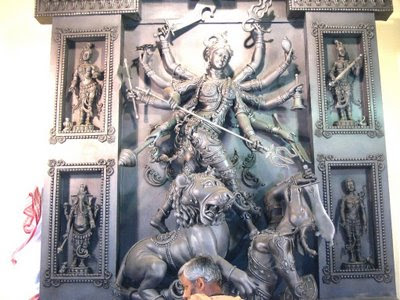 On 13th, started the navarAtram (नवरात्रम्) , or navarAtra (नवरात्र) as commonly, the trailing m is dropped in many Indian languages.
The word comes from - nava = nine; rAtri = night; navarAtram = group of nine nights.

HOW MANY?
There are actually a total of five such groups of 'navarAtram' in a year, though major one is in sharat (शरत्) - just before winter, a little before the crops will come in (two fortnights from now).

Saraswati is called shAradA (शारदा), who onsets of sharat season. The Hindi word 'sardi' (सर्दी) comes from sharad as well.

WHAT AND WHY DO WE CELEBRATE?
Mother gives birth. Father may or may not be needed for propagation of life, but mother is always needed, at least one agent, to conceive, protect, and foster life.

Earth, giving everything that we need, is our Supreme Mother. Hence, the celebrations of the Mother force, just before the harvest season.

The Mother Force, or the Life Force will always win, and this victory is celebrated during this time. "Life will find a way" - from Jurassic Park may seem more modern and hip, but the idea is very ancient and very Indian.

For nine nights, after a long day's work is over, the Mother force is celebrated in all its various aspects - the knowledge, power, resource, wrath, justice. In contrast to today's entertainment outlets, our festivals were entertainment events embraced with spiritual metaphors, stories of awe and inspiration, reflection and coming together.
May you do that as well, along with shopping and revelry.


LANGUAGE:
Did you know that It is *not* nava-ratri (नवरात्रि) ! (Note the last vowel)
How could it be? Nine is plural, and rAtri is singular (night). Subtle language nit-picking?

In modern times, in some regions, people say it as 'navarAtrA' (नवरात्रा) as well, that is more closer to the original that nava-rAtri. But it should not be a long 'aa' (आ) at the end, it is short but clear 'a', (अ) as in u of cut.