Those who travel in space 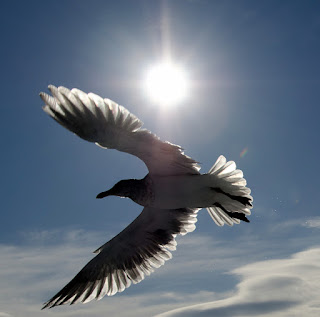 Rarely you will find a language where every letter has a meaning. And by this I don't mean  such meanings as in - "What does FRIEND mean?
F = Forever
R = Reliable
I = Indispensable
E = Entertaining
N = Noble
D = Dear."

Such meaning of letters are formed after the word is made, and centuries later when you are employed by the greeting card industry.

But in Sanskrit, every, almost every letter has a meaning, mostly as a root word from which other words are generated by specific linguistic and grammar rules. But we will not go there, too heavy!

The letter ख (kha) means 'space' as in the great frontier, or in ambiance surrounding you. Sky gets included automatically in it because from Earth, sky is the front yard to "Space - the great unknown".
So, we have words like: kha-gola-shAstra (खगोलशास्त्र) = astronotmy = the science of the orb of the space (or more literally space-orb-science)


The letter ग 'ga' is at the root of गम् / gam = 'to go'. See, even in English!
There are a large number of (a few hundred or more) words that can be made from 'gam'. While the verb formations will of course amount to a lot (for one goes, they go, you go, you all go, I go, we go ....) the nouns and adjectives are also amazingly abundant.

From the below list, I have removed the gender specific endings, to make these generic adjectives, just to keep things simpler:
गत = gata = that who has gone
गमनीय = gamaneeya = worth going to
गन्तव्य = gantavya = worth going to, destination
आगन्तुक = aagantuka = one who has come, guest? travelling salesman?

Here is how the word aagantuka forms from suffixes and prefixes:
aa (reverse) + gam (go) + -tum (desires to) + -ka (one who)

As a suffix, -ga would mean the one who goes.
I will save some words for other Kasts, and then we will see if you remember this Kast! :)

So, kha-ga ख-ग means 'One who travels, roams about, wanders in the space, sky'

So does it mean they had aliens travelling to India way back then?
Well, we all know a few space travelers ever since we know history, or our life's history.

They are called khagaH (masculine) or khagA (feminine).
But technically, anything that moves in space/sky should be a khaga!
And you are right. So, the Sun is khagaH, so are planets, so is the firefly, the arrow, and even a kite.

So how do I know which meaning to apply? Either context will tell you clearly, or someone made a nice puzzle using the 'pun' intended of Sanskrit.