this is a very much misunderstood shloka, and the misunderstanding comes from not taking in account the context, the speaker and the essence of the statement. this shloka appears in many shloka collections, including panchatantra and hitopadesha. the earliest reference seems to be in vidura neeti 5-17, which is part of the larger mega-epic mahAbhArata.

the wise minister vidura, of the kuru super-empire, is advising the emperor dhRitarAShTra to follow the path of dharma, right conduct, and not to let unfair things happen due to power intoxication or familial attachment. the emperor was literally blind, but metaphorically blind in parental attachment to his son duryodhana, and lets him get away with some of the most blatant and unfair thing he does out of jealousy and ego. duryodhana, the son was not ignorant of the right conduct, but he accepted he had a natural liking for a-dharma, even though knowing well he was doing wrong.

there are three common misunderstanding regarding this shloka -
#1. that the sacrifice of the [good of] smaller unit SHOULD be done to be able to get the good of the larger unit. this makes it a prerequisite to the greater good, which is not so.

#2. that this justifies mass killing like that done by Mao, Stalin, Naxal insurgents of india in the name of greater good. even eminent thinker like gurcharan das got this one wrong.

#3. giving it a spiritual spin, the last part is translated as 'abandon the [attachment to this material] world for your own moksha, nirvana.' i.e. leave worldly attachment, only then you will be able to liberate yourself.

explanation:
this shloka is 17th in the 5th chapter of vidura neeti, which consists of 8 chapters from udyoga parva of mahAbhArata. vyAsa was one of the greatest minds of his time, and vidura one of the wisest characters of his epic. so we must use caution before jumping to wrong conclusions from his words.

we have to read the ancient works in context, when it is against our beliefs or understanding we have to try to give them the benefit of doubt, that at least maybe they were right in their time and space. but what vidura says here, is right even today.

#1
this confusion comes because 'tyajet' means 'renounce/abandon' and it implies 'do it', like 'do abandon one person for the family, one family for the village...', like an imperative dictate. but it has to be taken as the last choice and permissible if it SAVES the larger unit physically, or reputation-wise. business may consider economic reasons.

e.g. in case of physical danger, the father may put his life at stake to save his family. we send soldiers to the border to save the rest of the society. when the pANDavas were at the brAhmaNa's house who had to send his son to the bakAsura rAkShasa, it was to send one member of the family to save the whole family, and the village. the story of the lion and the hare where the hare pushes the lion in the well, also had the same basis. the animals sent ONE animal everyday to the lion, so he spared the others from unnecessary killing.

if there is any way to save the smaller unit, it should be. and the smaller is not to be sacrificed to increase the profit, but to check the ruining of the larger unit. e.g. companies lay off some employees so as to stay afloat and save others and its own identity (avoid bankruptcy). but they do so in dire times. dire times call for dire measures. 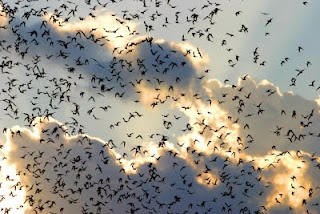 another way to understand the essence of this from nature is evident from the largest bat cave in the world - Bracken bat cave in San Antonio, USA. click for the videos - largest bat cave, bat versus hawk. there are over 20 million bats in Bracken cave. it takes them an hour to come out of the cave for hunting. they start an hour before dusk, and over 5000 bats come out of the cave per second. this is feast time for the hawks outside. and every day the colony loses some bats to these predators. should the colony stay inside for the fear of these predators? no, they all go out forming vortexes, and they will loose some of the bats on the outer fringes, but from the standpoint of the entire colony, that sacrifice is a necessary evil. as the video says at the end of the clip - "the sacrifice of the weak and unlucky is a small price to pay for the survival of the colony."

#2
in the link, gurcharan das likens vidura to Stalin, Mao, or Sharma of Naxal movement in india. that is the furthest from truth.
while it is true that wars by definition lead to some casualty, and all involved parties are ready for that, having a genocide was a never a prerequisite to save a society. what vidura is saying is again to be looked in the proper context and intent.

what vidura is hinting to the emperor is to save his and the dynasty's good name and abandon ONE, the interests of ONE, i.e. duryodhana. and for the sake of the country abandon the selfish and a-dharmic interests of the kaurava family, 100 kauravas. for if this war happens, it will lead to the destruction of the whole empire, many great warriors, administrators, wise men will die. this will not be in any one's interest. this is totally opposite to any genocidal leader being equated to.

duryodhana is bringing ill fame to the dynasty, and vidura is referring to abandon the interest of ONE (duryodhana) for the sake of the interest of saving the ill repute of the dynasty. throughout mahAbhArata, vidura advises dhRitarAShTra to abandon his attachment (moha) to his son, and rather follow dharma, and the emperor keeps saying - "what you say, wise vidur, of dharma and neeti is correct and i like it, but when i think of duryodhana, i forget your advice."

vidura is saying to leave selfish interest and save family name, leave petty interests of kuru sons for the sake of the empire! how much more dharmic can he say!

#3
the assumption that this is spiritual advice is also wrong. since this is practical advice given to the king who has asked for it, and the context is also that. what vidura means here specifically to the emperor is that if, to be dharmic, it takes you 'to give up the whole kingdom (earth) to the pAnDavas', so be it. the emperor should do it. because the sin of this a-dharmic act (injustice to the pANDavas) will only go to him, for he is the supreme (emperor) right now. duryodhana, his son, should be controlled and could be, but for the parental blind love he had, and his desire to see his son be the king that he himself couldn't be (due to blind by birth).

----
this is an important post for a critical reason. how to interpret a shloka said thousands of years ago properly? and then how to apply it for modern times.

at the surface it is easy to pick a simplistic, literal meaning, or even to taint the meaning with events of our times and lose the original essence. when interpreting, we must take in account the character, time, place, situation of the speaker. like last time we saw, when vidura said 'sweet spoken wife' and we extended it to mean 'spouse' for modern times.

this shloka is a strong reminder to us all, that we should not be after petty selfish desires, and that too at the stake of the larger good, as the emperor dhRitarAShTra was doing, in his blind love to his son.

it is also a false impression among many that sanskrit is only about spirituality. yes, at the end all roads lead to (super) soul, but in between the journey is long, and we need advice for the journey as well!

so, renounce smaller selfish interests, think big, the greater good, and all things small will take care of themselves in the basking glory of the greater good achieved!


like it? then become a fan of the blog
how can this site be made more interesting, useful? share your comments, use the comment link or the comment box below
and now the language aspects of the shloka -

kulArthe = kula + arth_e = for the purpose (arth_e) of family/lineage (kula)
arth = purpose, meaning (wealth, resource are other meanings, but not applicable here)