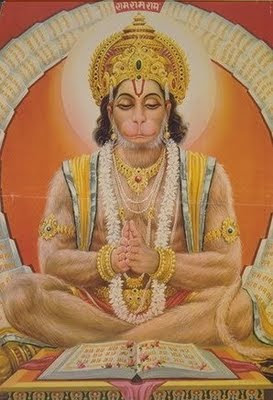 while devotees of any divine form will say that their divine will give them everything, why are these things associated with hanumAn - intellect, strength, patience, fearlessness, health, consciousness (awareness) and oratory? there are specific reasons.

in the master epic rAmAyaNa of vAlmIki, we come across a wonderful character named hanumAn. his character has captivated people from all times and of all ages. along with shiva and ganesh, perhaps there are most temples of hanumAn. so vast are the qualities of hanumAn and the reasons for them that one post will not be sufficient.

being an avatar of shiva himself, he is favourite of bachelors, and men of strength like wrestlers. he is called as the monkey god. but calling it that in english removes all the greatness one feels when refered as vAnara - which means "maybe human", i.e. half human, like the great apes.

there are many shlokas in his name, and saint goswAmI tulasidAsa wrote a full 40 verse, compact poem called "hanumAn chAlIsA" i.e. 40 verses of hanumAn. in it, he summarizes all the adventures of the great hero.

while almost all hindus have unwavering faith and devotion for hanumAn, it would still help to analyze and understand the praises for the great hanumAn. rAmAyaNa tells us how indra hurts young hanumAn with his thunderbolt. his father vAyu, threatens to stop air movement everywhere and creation starts to suffocate and bloat. lord brahmA advises all the gods that hanumAn descended to earth only to fulfill their desire (of killing rAvaNa). then out of remorse and self interest, all gods end up showering all kinds of boons upon the young hanumAn, because of which he can change forms, size, be the wisest of all.

he was also the true loyal devotee of rAma. everyone else who comes to help and support rAma had a reason or motive. sItA was following wife's duty, lakShmaNa of the younger brother, sugreeva and vibhiShaNa wanted kingdom. only hanumAn had no reason to be so loyal to rAma and yet he was the most. so loyal that it is said that he shall live as long as rAma's story is told on this planet. while within india these stories are always alive, most popular stories ever written worldwide, have followed the lines of the master stroke rAmAyaNa.

due to his boons from brahmA, bRihaspati, indra etc. hanumAn got all the wisdom, mastery over language and vedas, immense strength, patience. being son of wind force, he was fast and fearless. due to his wisdom he was both a great speaker of wise words but also a realized soul. the reasons for his coming down as a great ape is to find the loophole in brahmA's boon to rAvaNa which asked for immunity from all but humans and animals.

rAvaNa could be killed only by humans and animals. all the gods appear as apes or great bears to help rAma who is the avatAra of viShNu. so it is not superstition that hindus worship animal gods, but the master story telling of rAmAyaNa and God's ability to be anything at anytime and any place, that hindu's worship forms of elephant, monkey, snake, eagle etc.

we will cover more on hanumAn in later posts.

may the great hanumAn shower you with boons of true knowledge, true strength and oratory.
jai hanumAn!