as the land so the [ground] water, as the seed so the sprout.
as the region [country] so the language, as the king so the people.


the last part of this shloka - yathA rAjA tathA prajA - is an often quoted famous saying, used in perhaps all languages of india, specially in sanskrit and hindi. a good friend asked me for some quote on 'If we sow goodness, we will reap goodness; if we sow evil, we will reap evil.' and in that connection i ended up searching the internet for it, maybe in an attempt to give a quick link. but i never found the full shloka anywhere. i don't remember the original source, so that is still a mystery. any help would be appreciated.

as the land, so the water.
the ground water differs from place to place. the mineral content, the medicinal powers are different. even the contamination! bottled water is sold as 'From the Source in the Alps!'. why does it matter, when it is only H2O. but no, it matters. different natural water sources have different healing powers, like hot springs. and all because of the particular composition of the land, the earth in that area.

there are people who get, or are cured of, skin problems when they move from one place to another. people have solved gray hair, stomach troubles and many such problems by moving to another place. as 'they' say - oh, it is in the water! or e.g. in india when someone moves to a new place and gets health issues, people would say 'the water didn't suit you.'


as the seed, so the sprout. (and hence tree, fruit etc.) 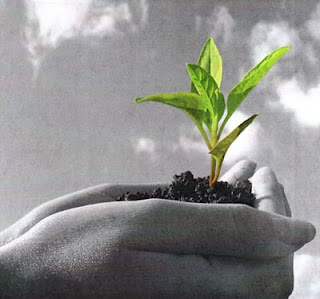 there are many quotes on this one, all around the world. "as you sow, so shall you reap." "boyA pe.D babool kA aam kahaa.n se hoye?" (i.e. if you sow the thorny babool tree, how can you expect mangoes?)

this is also the basis of the karma rule - you get according to your deeds, karma. you only have control on what you do (what seed to choose). there seems to be some confusion among people when they start equating karma and destiny. karma is your free will, destiny (or daiva) is the unknown factor you didn't account for in your planning, simply because it is unknown - no prior signs, not in your control and you didn't even foresee or plan ahead for it - that is daiva. (as told by rAma to lakShmaNa in rAmAyaNa)

as the region, so the language
here is the classic proverb - when in rome, do as romans do. this part says that you should use the local language to get along. you will be surprised how much more you can gain by knowing the local language - be it taking autorikshaw (small taxi in india), or out-smarting pesky tourist guides, or just haggling while shopping.

language is a direct product of its culture. so, expand the language to culture, in the saying and you have "as the region, so the culture (to follow)", i.e. 'when in rome, do as romans do'. blend in. don't stand out as a sore thumb, as arrogant outsider, as a roadblock, blend in. be part of it. if you move to somewhere, why not be like them - food, cloths, language - enjoy the full experience. else why move at all?

there are two words used here - bhoomIH and deshaH. while bhoomIH means earth, land as is (no political connotation), desha and pradesh mean region. today they are used synonymously with country or nation. but technically the word for country would be rAShTra or rAjya (reign, kingdom). hence 'as the region' implies using all the characteristics of the region - language, cloths, food, medicines etc.

a friend of mine from bengal went to rAjasthAn in the 90s as a regional sales person. coming from urban calcutta (kolkAtA), he was looking for 'better' places to stay and eat so he could find his regular bread-sandwich and other dishes. while at a tea stall, a local man asked him if he was from outside and planned to be here for some time. he said - "to remain healthy here do two things, eat local food and wear a big turban (for the scorching heat of the desert)". my friend followed this wise advice and had a wonderful stay lasting more than a year, roaming every nook and corner of the wonderful state of rAjasthAn.

as the king, so the people
people today in democracies think it is the opposite - as the people so the president/prime minister etc. but the first quality of a leader is role model. the entire rAmAyaNa is written with this premise, and rAma persistently guards his character lest it becomes less than a role model. for his duty as a king is more important, since that is his dharma, being born a prince and a heir apparent.

there are many shlokas that refer to this subtle and (by modern standards) at times foolish belief that leaders ought to be role models and honest. all that people seem to care nowadays is the stock price! but, if the boss comes on time, the employee comes on time. if the boss takes home the stapler from office, the employee may start taking pencil or pen. or at least not feel guilty about it. (many at least!)

a king was on a hunting trip and stopped for rest and food. with him was the whole entourage. they found that they forgot to bring salt. as the soldier was being sent to the nearest village to get some salt, the king said - 'please make sure you PAY for the salt.' the soldier looked shocked - the king!? has to pay!? for the measly salt!? from a lowly village of his own kingdom!? the king explained to the puzzled men - 'if i take the salt for free, i know what all my soldiers might end up taking for free from a small village. soldiers are like tigers, brimming with force. please pay for it like a regular customer. i don't want to set a bad example to my soldiers.'

traditionally, the scriptures have always upheld a model of father-children for the king-subjects relation. unheard of in many civilizations. so, just as in the family, children don't listen to the parents, but watch their every move, the king, leader, boss has to be careful in his conduct to set a good example.

"yathA ABC tathA XYZ" means "as is ABC, so is XYZ". the yathA and tathA pair goes to show similarity.