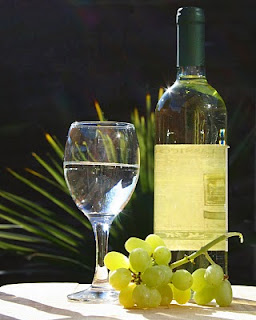 it says that alcohol, which is mainly made from grains or fruits, is essentially, naturally, materially, chemically the same as food in its energy giving ability. but its use is what makes it good or bad.

when used inappropriately, in excess, over the limit, in competition etc, it can be dangerous. but if used moderately, like good wine, it can be like nectar/ambrosia. nice feeling, appetite building and even helpful in digestion. and as modern research will have us believe, it even reduces heart attack (red wine).

why this shloka? well, one of course the language is simple.
second, it gives another aspect in indian life. alcohol is considered so bad, it is one of the sins etc. it is the barrier in spiritual growth.

but we should remember, that life was not synthetic in india, not curbed randomly. alcohol and even meat eating are accepted as things that happen when one is born in the material body (manusmRiti).

food we eat impacts our thinking and subsequently actions. for the ones on the pursuit of truth, brAhmaNa, having a woozy mind is counterproductive. having any habit is slavery of the mind/manas. hence, for a brAhmaNa it is prohibited.
for a kShatriya or other varNa, it is not prohibited. for soldiers, or rajas-dominant people it is accepted. even from forever. even in times of chANakya and before, there were so called alcohol bars, joints, and butcher shops.

but this doesn't mean it doesn't have consequences.

wine drinking, as compared to liquor was an accepted form even in RiShis and brAhmaNas, though not so easily affordable for the latter.

so where did it start? the prohibition on alcohol? well, the story of kacha and devayAnI has one answer. kacha was sent by the devAs to learn the art of sa~njIvanI (reviving the dead) from shukrAchArya, the guru of daityas.

he accepted the disciple, but the daityas didn't like their enemy learning the secret of their success. so they killed kacha. but because the guru's daughter devayAnI was in love with kacha, the guru revived him. after two failed attempts, the daityas hit upon an idea. they killed kacha, burnt him, mixed his ashes in alcohol and served it to the guru. the guru was happy with the present and drank it all up.

when devayAnI again asked her father to revive kacha, he came alive in his belly. the only way to let him come out was to tear the guru's belly, which would kill him. so guru shukrAchArya taught him the sa~njIvanI vidyA, let him come out, and revive the guru also.

after this, the guru was disgusted, shocked and told the daityas that because of their foolishness, he had to teach kacha the secret. then he declared, that alcohol made his judgment unclear, and hence forth no brAhmaNa should ever drink it.


in another similar shloka, charaka says that "food is like breath (life force), and when used appropriately it is for nutrition, else fatal."

it is good to remember that indian thought and life has not been skewed irrationally. there are different advices for people living in different levels of body/spirit and role in society. it is never "one size fits all."