Those who only play with words are like rams (don't understand the meaning),
Those who are 'smart' are like parrots (they repeat what they heard).
The true worthy are they who are poets and intelligent,
people who insult such worthy, are surely animals.


I saw this apparently ordinary shloka and included here for a few reasons. I don't know the source, since what I was reading too didn't have the source mentioned.

The words apparently look difficult, or at least not in ordinary vocabulary, so I learnt a few new words myself. Check the language section towards the end. But once the word is understood the sentence itself is simple, keeping in line with the simple sanskrit. 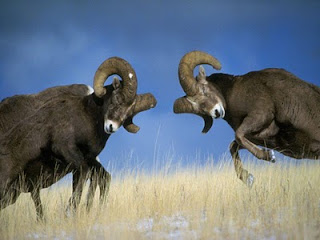 So it says that those who make verses but don't understand the meanings or have visionary abilities are like rams, no brain inside because of excessive banging of head to make the verse :)

And those who are not necessarily good with wordsmith-ing, merely repeat what they read and think they are smart, are like parrots. Parrots are known to recite whatever they hear. When people asked the way to the home of the famed scholar Maṇḍana Mishra (contemporary of of Ādi Shaṅkarāchārya), people were told that 'the house where the parrots hanging outside in cages are correcting the recitation of the students is his house'. But these parrots surely didn't know the meanings of the words the so perfectly recited.

The truly worthy are those people who have both an analytical mind and a sensitive heart, and can balance the two out. These are the people who can think original as well as put them in words nicely. These are to be cherished by the society. Anyone who would insult such a rare combination is really an animal, gavayaH/gavayaḥ, a variety of cow.

The shloka has a modern bearing on many who profess 'wisdom' in modern times. The words are used in satire as well as different meanings.

Kavi - used to mean a visionary. People wrote in verses for memorization. But the true mettle of a kavi was the vision, the idea. Word-smithing was just a by product of profound mastery on language, grammar, prosody and other shāstra-s. With time, the word 'kavi' started to mean only a poet, wordsmith. Today, in all regional languages of India, it means merely a poet, verse maker.

The requirement of having a vision, or literally 'darshana' (vision of divine, greater than ourselves, for the society, but a vision, some ideal) is no more there. Therefore you have humor poets also, who simply make half vulgar limericks and are stars on TV channels as poets, kavi.

dhIra - Traditionally dhIra/dhīra is one who has patience (dhairya), from which alone comes wisdom. So dhIra/dhīra means a wise person. In this shloka it is used satirically, since a person who thinks himself smart and intelligent by reading the scriptures, shAstra-s/shāstra-s, sciences etc. but has not done anything original of his/her own. Merely, repeating like a parrot. There are many such people today, as there were earlier. Maybe the number of such people who think they are smart is also similar, but I think it has increased more these days, compared to older times, when the label of educational degree was not so freely available as today.

This problem is greatly and almost invariably seen when people explain ancient works, Hindu scriptures, shAstra-s/shāstra-s. To some extent I believe this is true in other religions also, because of which the rigidity has crept in all religions. Where is the problem?

The seers, RiShi-s/ṛiṣhi-s almost always were poets of true sense, were visionaries. Here is a simple analogy.

Have you ever sat and contemplated on some point (need not be high spirituality), and seen a clear picture, solution, reasoning. But the process to get there was long, and you are not able to explain to others exactly what you mean. The words you use are misinterpreted by others, who have not sat patiently thinking the same way that you did. And you feel helpless how you are not understood, even when you are using apparently so clear a language. We are not talking clear cut 7th grade Algebra. We are talking feelings, soft skills, social issues, people issues, visions of unseen.

For example, if you read rAmAyaNa/Rāmāyaṇa or Harry Potter book (yes, it is okay to put them in the same sentence for this example), then you start having imaginations of their world, how a demon looked like or a demonter. But then, you are not able to exactly replicate the vision to another person. Then you go and see the movie or TV serial made on those books, and you feel so cheated. Oh, no! The movie makers had no vision! I could see such wonderful worlds while reading, these guys have no imagination.

What happened? The same words read from the book, transformed differently in the final product.

Now, imagine a more subtle area, of spirituality, religion, social observations. That too, done thousands of years ago. Times have changed, agenda of god-men has changed. Most of the god-men are busy protecting the 'turf' or building 'client' base. I remember the evangelical channels in US so well, and I thought I was missing them in India, and lo and behold, there were the Hindu versions of them, and soon after the originals from US too are being broadcast here, for one's superstitious needs.

How easy it is, not to understand the soul, the real intent of the seers, because we are not imaginative, we are not unbiased, we are not free from modern bombardments of desires and marketing. And the iron grip of things divine, hell and heaven - who can dare argue with the 'robe'?

This has killed the spirit. People are taking literal meanings of metaphors, because that is how it was taught. When will people try to use their own poet within, the seer, the unbiased, divine spark that cares for all, and hates none, has no ego or need to show off, who just observes, and enjoys? And if they don't have that in them, when will they stop 'explaining'?

With the topic itself being what it is, I should humbly apologize for any mistakes in my understanding or vision of this :) or else i may be labeled avayaH or gavayaH myself !

Bring knowledge to life,
Poetry to breathe a vision in you,
That makes you one with all
And not one above all.

kevalakavayaH = केवलकवयः = kevala + kavayaH = only poets
kevala = only
kavayaH = plural of kavi.
here kavi is used to mean only a wordssmith, one who plays with words. this is common understood meaning of kavi, whereas the vedic and earlier meaning is not just a wordsmith, but one with a vision.

dhIrAH = धीराः = intellectual
dhIra = wise, patient, with intelligence
here, dhIrAH is used in its popular sense as 'learned' with a satire in the tone.

paNDitakavayastAnavamantA = पण्डितकवयस्तानवमन्ता = paNDita-kavayaH-tAn-avamantA
paNDita = one whose paNDA buddhi is developed, reasoning, analytical powers.
kavayaH = poets
here the word is paNDita-kavi as compund word, hence the plural of the word didn't change paNDita to paNDitAH, but only the kavi to kavayaH

gavayaH = गवयः = a type of cow
from gau, gavaya is a variety of cow species.