for kRiShNa, for the son of vasudeva, and for the [source of] joy of devakI,
for the boy of the cowherd [chief] nanda, for the benefactor of cattle (cows), salutations.


it seems like lot of you like devotional, bhakti mantras rather than the worldly wise neeti sutra. so let me pick some devotional bhakti mantras for simple sanskrit, starting with one of the most favorite of kRiShNa mantra.

while it is impossible, for a mere mortal like me, to dwell on all the details of the most intricate character of kRiShNa, let me touch on the language aspects of the words.

kRiShNa has many many names. viShNu has even sahasra-nAma i.e. 1000 names, mainly describing the attributes, or mnemonic for stories and incidents from his life and leelAs.

e.g. dAmodara = dAmA (rope) + udara (belly, wasit) = reminds of the story when he was tied to the grain-pounder with rope by yashodA.
vArShNeya = of the dynasty of vRiShNi
madhusUdana = slayer of madhu, an dAnava.
giridhara = giri (mountain) + dhara (holder) = one who held the mountain (on his little finger)


kRiShNa means black, e.g. in kRiShNa-pakSha and shukla-pakSha - the two fortnights in a lunar month. or kRiShNa-phalakaM = black-board.

to mean "black", there are other names as well, "shyAma", as in
shyAma-paTa = black-board.
'ghana-shyAma" i.e. dark as the rain-bearing clouds.

a deeper meaning emerges when we look at the word root.

the root of kRiShNa is "kRiSh" which means to plough (plow) the land, to tear, pull, pull apart, drag. other words -
kRiShi = ploughing the land, where land is literally pulled apart.
karShaNa - pulling, tearing.
AkarShaNa - attraction, pulling towards oneself.
ut_karSha = joy (uplifting)

while rAma is the senior avatAra, he is more idealism, draws respect and awe. he is for people who are already on the path of perfection. (of course bhakti as well). rAma first touches your intellect.

but kRiShNa is one, who even if you don't believe in, when you hear the stories, the leelAs, you start getting attracted towards his character. he first touches your heart, not intellect. he is one who draws you to him, as if you have no control on yourselves.

vasu = wealth, opulence, prosperity, treasures.
vasu_dhA = earth, the giver of all material treasures (literally)
vasudeva = the lord of wealth
vAsudeva = (note the vA- instead of va-) of vasudeva.

so vAsudeva signifies that he is the son of vasudeva. 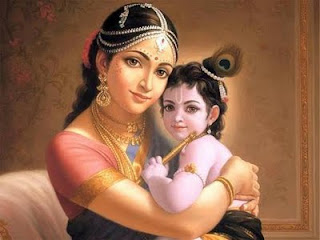 devaki-nandanAya
devakI-nandana = one who brings joy to devakI, his biological mother.
from nanda = joy.


govinda = the multiplier, enhancer, nourisher of cows (cattle).
go-vardhana = one who increases the (health and/or number) of cows/cattle - the mountain near braj.

from an agrarian society standpoint, kRiShNa's role is immense - the protector, nourisher, benefactor of cattle, which was the true wealth in every sense in those days. today too, we owe everything to this land, though we have machines and do not have direct, alive connection with the land. it is only dead connection - road, buildings, malls on the earth. the urban is not connected much to the land. 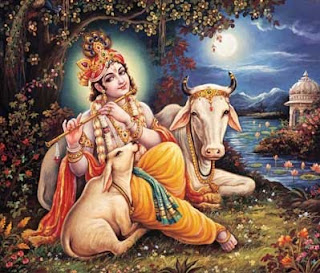 the real power of sanskrit comes, when we realize that as feminine 'go' means cow or cattle. (even the word 'cow' in english comes from 'go' or 'gau' in sanskrit). but as masculine it means among other things 'senses'.

hence "go-swAmI tulasIdAsa" - the author of rAma-charita-mAnasa, the vernacular retelling of vAlmIki's forever classic 'rAmAyana' - doesn't mean "cowherd tulasIdAsa" but "master-of-senses tulasIdAsa". his story of rebuke from wife and subsequent renunciation is famous, after which he was called go-swAmI, one who is the master (and not slave) of his senses.

so kRiShNa's name govinda also means one who enhances the senses, fills each sense to its maximum, nourishes them. why? maybe he wants us to take to him as a starting point, from something we know - the senses.

moksha, liberation, renunciation is easier if we go through kAma, enjoy the senses and get over them. else, we may all along wonder what we missed. so, rAma may inspire in us an austere resolve. we keep it for some time, and then give in. it is difficult for most people to ignore the senses.

but what if we are told, ok, enjoy the senses (reasonably) and get over it. that is the kRiShNa path. it fills over senses with its pull. the path of mokSha becomes easier if we have gone through kAma, if we can grow up and get over it. if we can't, then like yayAti, we run after them for thousands of years and still can't get over the senses.

language learning = if the word is masculine and ends in 'a', then -Aya suffix makes it "for xyz". e.g kRiShNAya, vAsudevAya, nandanAya, kumArAya, govindAya!

i already ask forgiveness for any error of any kind in the post, which is inevitable for a topic like kRiShNa. but the intention is good and to introduce some more simple sanskrit.