meet the alphabet - letters and vowels Ri and Rii

this vowel sound is the one of the most confusing sounds in sanskrit, that have also got modified in regional languages in two different ways, unlike any other sounds. the other sound being that of 'GY'/'jn' (ज्ञ) as in GYaana/JNaana (ज्ञान)

short sound - RRi (ITRANS); ऋ (devanAgarI); ṛ (IAST)
long sound - RRI (ITRANS); ॠ (devanAgarI); ṝ (IAST)
as for sanskit use, a single Ri is sufficient, but since there is another sound in marAThi language, ITRANS chose RRi, rather than just Ri.


these are sixth and seventh letters and vowels of sanskrit. the longer vowel is extremely rarely used. the shorter vowel is also used in very few words, but it is used in some of the most common or important words. i for one, never understood why such a rarely used vowel was used for such important words (see later).

a few pointers will help in its pronunciation.

how to write 'Ri'?
see the step by step method to write the letter. it is also one of the most complicated single letter to write. its left side is like 'tra' (त्र) and right side like a cursive 'r' of roman script. 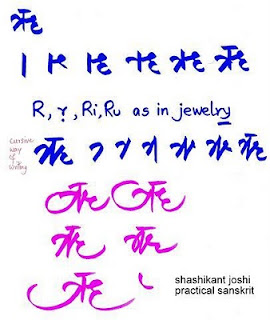 some common words starting with 'Ri/ऋ' are -