rich man, wise man, ruler, river, and fifth, doctor.
where these five are not, don't make residence there.


continuing from the previous post on where not to live, we come to the next shloka that describes a place where not to live. in the last post we saw that one should not live where there is no respect, livelihood, relatives or knowledge. that was from personal standpoint.

from social standpoint, one should make sure that five things are present where one wants to move and live. or one should move out if these five are not present.

financial system
this is what is meant by 'dhanikaH' (धनिकः) . today, we nee a financial institution like a bank to keep our money safe, or to take an occasional loan when needed. we discuss which bank offers better rates on loans, cards, mortgage etc. people do revolving credit in a vain attempt to even escape the interest but keep the loan!

in india, even then, the role of the rich man was important. shreShThi (श्रेष्ठी) means a rich merchant, from which comes hindi word seTh (सेठ) and the last name shetty (शेट्टी) as in Shilpa Shetty, comes from the sanskrit word shreShTha (श्रेष्ठ) meaning better. the highly developed arithmetic and algebra also had a reason in debt calculations. complicated multiplication tables of 1.25 and 1.5 were taught in ordinary indian schools as late as 3-4 decades ago! good or bad, the rich man was needed for drought relief, wedding expenses, safe keeping.

educational system
wise, learned man is what is meant by 'shrotriyaH' (श्रोत्रियः ). shruti श्रुति (hearing) is veda वेद , that which is heard. shrotriyaH is one who is well versed in veda-s, which contain both religious ritualistic knowledge as well immense wisdom on spiritual matters as well as human mind, social matters. its proper study gives discipline in life and self restraint. such a wise person is required always. be it for the education of children, counseling of grown ups or to perform important rituals of life - birth, wedding, death.

in today's world that would amount to places of education and worship.

legal system
law and order is meant by the word rAjA राजा . without an effective king, society becomes lawless, anarchic and goals of social togetherness are defeated - safety of people, prosperity and peace. be it from external attacks or internal decay, crime, unemployment. a king is akin to today's government, some may argue that even better than it! the word rAjan राजन् comes from rajas रजस्, i.e. active guNa गुण. society is the name of action, not renunciation. the renunciate guides, but the king propels! an effective king stimulates the economy, generates environment for fruitful employment or entrepreneurship, while keeping everyone's interests intact. he also helps maintain law and order.

transportation and water system
nadI नदी is river. all great civilizations have happened by rivers, and even today all great cities are close to a river. earlier it was a source of water and transport, today it is an industrial waste drainage par excellence. wither way, we need good water, potable water and good transport system. good infrastructure is the backbone of an economy. and good drinking water is the backbone of life as we know. it is sad that today rivers are unsuitable for even the worst of the life forms! and drinking water is only in bottles, so much for progress! 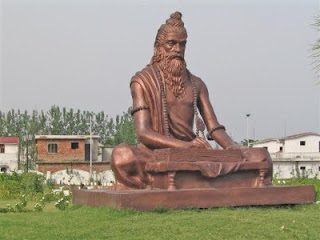 charaka चरक - the great sire of ayurveda आयुर्वेद
health care system
vaidya वैद्य is a doctor. ayurveda आयुर्वेद is the science of life, health. it is not witchdoctor or witchcraft, it is a long tradition of serious study of medicine, surgery, cosmetics. not many are aware today of the huge volume of charaka चरक and shushruta's work, that is one of the hottest sanskrit work being printed today. and modern allopathic doctors are the biggest consumers of it. this fact was revealed to me when i went to a reputed sanskrit publisher with a list of books marked off from their catalog. i was told for most of the books that they are out of print. so i asked, what is being printed then? and the answer was - course books (in colleges), ayurveda, astrology  and yoga.

health is the most important aspect, and the extreme step of it is life or no life. and the world is only so long as you have life. the world dies with you. so, do the best to keep alive! and if alive but not healthy is worse than death! for you have the mind that desires but a body that can't fulfill it due to bad health. be it diabetes stopping you from sweets, arthritis from traveling, obesity from eating.

these are the basic pillars of a civilized society - financial, educational, legal, infrastructure and health management.

as mentioned in earlier posts, and in hitopadesha हितोपदेशः itself, the compilation of hitopadesh has taken shloka-s of worth from all sources. and just to make sure the copying is identifiable, the compiler modified a word or two to ensure the original is not quoted exactly, thus creating confusion.

here too, these shloka-s are taken from garuDa purANA गरुडपुराण (1.110.26), the last place one would expect to find full course on shubhAShita-s सुभाषित in a purANa! but it is true! what boggles my mind, is the compiler of hitopadesh, had such a wide reading, and memorized all of them, and could pull shloka-s as needed for the context. today, it is difficult to do so even with a search engine, google and wikipedia!