Now for a lighter post, after much serious and newsie stuff :)

Pun is a very powerful tool used in Sanskrit just because the language kind of lends itself to it, with multiple meanings of words and different breaking points for sandhi (liaison) and samAsa (compounding) and different ways of compounding (which preposition is omitted).

So much stress is laid on good karma (कर्म), for karma (कर्म) alone decides our future. Even old karma (कर्म) gets to play the role and daiva (दैव) or destiny being the totally unknown factor beyond our current comprehension.

To understand दैव we should take a simple example. Few hundred years back people may not have known why someone died of 'consumption', what today we call tuberculosis. Then someone would have said, "Well it is your daiva (दैव)". Today, we know and we can say, "Well you must have done some karma (कर्म) to be exposed to the bacteria, and then some karma (कर्म) to not seek cure, hence the results." If we change the karma (कर्म) of laziness or unawareness to that of going for treatment, we change our own future and become cured of this ailment.

So, we are told to do good karma (कर्म), only then anything good will happen to the society, to us, our next generation and the environment and to the whole unknown universe, kind of like the butterfly effect! :)

But the poet takes a jab at those who don't do any good karma (कर्म) when they were able to, and simply get old as a parasite. He says that old age even does good to them, gives them good credit points by making them yama (यम) god of death, viShNu (विष्णु), chandra (चन्द्र) moon, and shiva (शिव), that too, all at the same time! What more good karma (कर्म) can one do to be so fortunate to be all four in one go! 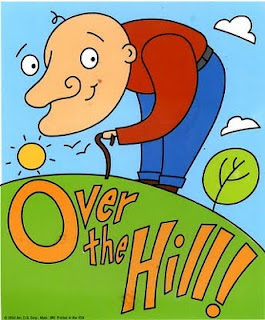 How does old age turn even a selfish person into all these great divine powers?

yama (यम) has in his hands, a stick, club - the stick of rounding up the dead, if you may and take them for auditing to decide where they go.
The old man too has a stick in his hand!

hari (हरि), or viShNu (विष्णु) has the mace, which is called gadA (गदा), so viShNu is called sagadam (सगदम्)- one with the mace. The word mugadara (मुगदर), a large club for gym training used even today by wrestlers also comes from the same word.
The old man has disease, or gada (गदः), so he is also sagadam (सगदम्). The root for both words is though 'gad' (गद्) (rhymes with bug).

The [crescent] moon is crooked.
The old person, with a hunchback or a hip problem or some other issue, is also crooked.

shiva (शिव) is called virUpa-akSha (विरूप-अक्ष) i.e. one with special eyes (what with three eyes instead of normal two!).
The old person too has 'special' i.e. distorted eyes, and weak eyesight etc.

Of course, all of these are said in satire for the selfish (that at least old age will make him 'great'), and as terms of endearment to shiva and moon.

And, it is not making fun of the old people, but of the selfish.

So here goes the shloka -

Like yamarAja [god of death] holding a stick in hand (walking stick in old age),
Like hari [viShNu] with mace (gada = disease, for old age),
Like [crescent] moon that is crooked (crooked body posture for old age),
And like shiva with special eyes (shiva with three eyes, old age with 'special'/distorted eyes),
Old age does good (puNyam) even of the [selfish] non-good-doer (akRitam)
[by making him yama, viShNu, moon, shiva simultaneously].

shashA~Nkam = moon
shasha = rabbit, hare
a~Nka = mark (also marks as in test paper!)
so moon is one with the rabbit mark. western folklore sees a spinster at a spinning wheel, eastern tales see a rabbit

virUpAkSham = distorted or 'special' eyes
virUpa = vi-rUpa = distorted or special form
rUpa = form and vi- prefix makes it special, you can take it in good or sarcastic way.
so, "He is so 'special'!" is sarcastic, and "He is so special!" may be a compliment.