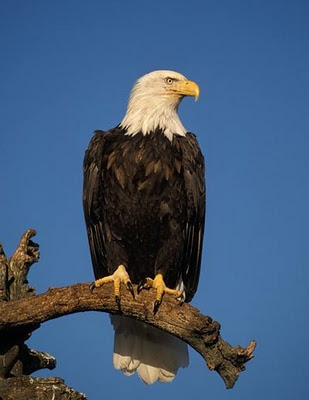 The eagle is a fast bird. Just like a rabbit is a fast hopper. Remember the hare the tortoise story?

But their talent is of no use, if they don't use it. An eagle though can surpass a mouse in no time, will not have moved a single step, if it sits perched on the branch. To succeed, it has to take the flight, it has to move.

The toughest thing is usually to take the first step. Once that is done, half the battle is won.

'garuDa' गरुड is the son of 'vinatA' विनता , and hence is called 'vainiteya' वैनितेय . He is the king of the birds, and a vehicle of Lord 'viShNu' विष्णु and is known for his speed. Because of him Lord Vishnu can move from anywhere to anywhere in no time!

But even the might garuDa गरुड, the golden winged suparNa सुपर्ण , will not moved an inch while it is still perched on the branch. There is no substitute to the first step.

Similarly, mere wishing won't make things happen. You have to work at it. Procrastination or wishful thinking doesn't do any good. Else no one would have to do anything. They could simply wish and viola!

अगच्छन् = (adj) while not moving
This is one of the ways to denote 'while doing something', and they are treated as adjectives of the do-er.
e.g. "Don't read while eating.", here, 'while eating' is khAdan खादन्.
Similarly, 'gachchhan' गच्छन् means - while moving. with the a- prefix it is the opposite.
hence, 'while not moving'.

There are other rules, but mainly the -an -अन्, -aan -आन्, -maan -मान् suffixes are used.
In some cases, for feminine forms, the verb in third person, plural is used with a long -I (-ee) -ई ending. e.g. gachchhantI गच्छन्ती, pibantI पिबन्ती, vadantI वदन्ती etc are valid words (the ending is NOT short -i) which are feminine adjectives meaning she while going, drinking, speaking etc.