Yesterday night June 16, 2011 early morning Indian Standard Time, was the longest of the lunar eclipses. It was also a central lunar eclipse, meaning that the center of the earth's shadow passed through the moon's circle.

The concept of eclipse is today explained scientifically and is not a matter of mystery anymore. There were times when it was mysterious as well as scary. Specially the solar ones. One should be a bit cautious of the solar ones even today, for looking directly in the sun can damage the eyes.

Nothing like that for the lunar eclipse though. See as much as you want. Though I could not take any pictures on my own due to clouds in Bangalore, some early photos can be seen here.

It is interesting to note that India had taken some great astronomical leaps long, long ago! I am not talking about identifying the pole star and Ursa Major etc. Even more specific. 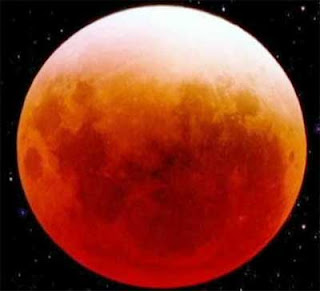 Aryabhata आर्यभट/ आर्यभट्ट (476–550 CE) mentions the reasons for eclipse in no unclear terms.

[i.e. chandraH jalam, arkaH agni, mRit bhUH, chAyA api yA tamaH tat hi
chAdayati shahI suryam, shashinam mahatI cha, bhUH chAyA ]
[AryabhAtIya, Gola-pAdaH 37]
"moon is of water, sun is of fire, earth is of soil, and its shadow is of darkness.
the moon covers the sun, and the great shadow of the earth covers the moon."
[The book of Aryabhata, Sphere section, #37]
He then discusses in detail, how to calculate the size of Earth's shadow and the size of the eclipsed part. These computations were improved by later astronomers a bit. His calculations were so accurate that 18th century scientist Guillaume Le Gentil, during a visit to Pondicherry, India, found the Indian computations of the duration of the lunar eclipse of 30 August 1765 to be short by 41 seconds, whereas his charts were long by 68 seconds. (Wikipedia)

He even gave the times for Jupiter's revolution, distance of Sun and earth, earth circumference. He also pioneered in trigonometry and trigonometric calculations. Tables of sine and cosine of angles were calculated that are even today precise to 3-4 places of decimal point.

Some of his statements on astronomy, in AryabhAtIya golapAda chapter, worth noting are:
1. Sun illuminates half of the earth, moon and planets, the other half remains dark. [5]
2. Heavenly bodies seem to move westward at equator, similar to parallax by which the forest seems to move from a moving boat. [9]
3. Sri Lanka 90 degrees from pole, Ujjain 22.5 degree north of Lanka. [14]
4. Cause of eclipses due to shadow of moon and earth and many calculations around it. [37]
5. Color of moon at different parts of total eclipse! [46]
6. At poles, Sun visible for 6 months, on moon, sun visible for half a lunar month! [17]

He did a lot more in mathematics including calculating the value of Pi correct up to 4 decimal places and knowing that it was indeterminate. Adding sequence of squares and cubes, and finding solutions to what is now called as Diophantine equations (Ax + By = C, A, B, C are integer, find integer solutions for x and y)

His work was translated early on in Arab and led to the advance of astronomy in Arab and Europe. More details, click here.